See What's inThings to Do

Anyone using Cayman waters is obliged to familiarise themselves with the applicable boating, marine and environmental laws.

The Department of Environment (DoE) has recently launched an app called ‘Cayman DoE’ which has up to date information and maps on the Cayman Islands Marine Park zones and National Conservation laws and regulations. Available on free on iOS. You can also visit www.doe.ky to download the marine parks map and for more information on Cayman’s marine and environmental laws. Boating and navigational laws can be found on the Port Authority's website.

The purpose of these laws is to preserve Cayman’s marine environment for generations to come. Breaches of the law are treated as serious offences and anyone committing an offence against the Marine Conservation Law and its regulations is liable to a maximum fine of CI$500,000, a year’s imprisonment or both.

The Department of Environment (DoE) have put in place open and closed seasons on various species as a means of ensuring the long-term and sustainable use of our marine resources. The rules now make both taking and possession illegal outside of the open seasons. This means that both the person taking marine life illegally and the person receiving/purchasing this marine life will be committing an offense.

Cayman’s Marine Parks were put in place in 1985. Due to environmental stressors, such as declining fish populations, reef degradation, climate change, rapid population growth and development, Marine Parks are extremely important for Cayman’s fish population to remain sustainable. The Marine Parks in
the Cayman Islands cover 48% on Grand Cayman, 43% on Cayman Brac and 57% on Little Cayman.

You cannot take any marine life, whether alive or dead, within a Marine Park Zone. Line fishing from shore is permitted, as is line fishing at depths of 80ft or more. Taking fry and sprat with a fry or cast net is allowed.

NOTE: fish traps, spear guns, pole spears and other nets are totally prohibited. No anchoring is permitted; only the use of fixed mooring is allowed. The exception is that boats of 60ft or less may anchor in sand, so long as no grappling hook is used, and neither the anchor nor the rope or chain will impact coral. Anchoring is also permitted in designated port anchorage areas. Contact Port Security on VHF channel 16.

In Bloody Bay, Little Cayman, restrictions have been placed on the use of the marine park, and no commercial operations may use it without a licence.

Map of Protected Marine Areas in the Cayman Islands 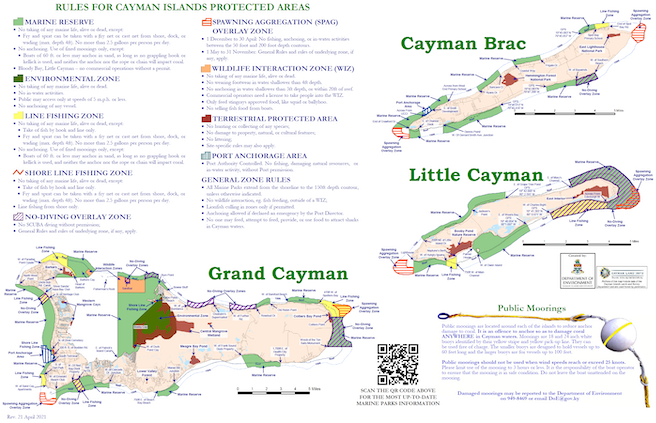 In Wildlife Interaction Zones the rules are as follows:

Special conditions apply to commercial boats who must have a licence issued by the National Conservation Council and clearly displayed on the boat to enter this area.

Restrictions in the Environmental zone are strictly enforced.

The rules are no marine life, whether alive or dead, can be taken, no in-water activities are permitted, the public may only access at speeds of five mph or less and no boat can drop anchor.

The DoE marine regulations in these zones include no taking of conch or lobster by any means; line fishing and anchoring are permitted (see Restrictions of Fishing section in this chapter) as long as anchors, chains or lines do not impact coral; spear guns, pole spears, fish traps and nets are prohibited (except that fry and sprat may be taken with a fry or cast net). Taking conch or lobster from this zone by any means is prohibited. These zones include the outside edge of the reef to a depth of 20ft.

In accordance with DoE regulations, the designated areas are: Coxswain Bank and South West Point in Grand Cayman; East and West End of Cayman Brac, Little Cayman and the Twelve Mile Bank. We discourage you from catching grouper as they have been over fished and the population has been severely depleted.